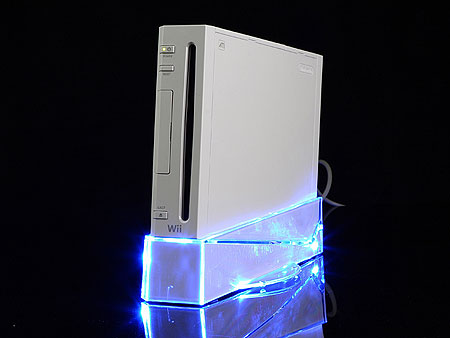 While the Wii is the least powerful of all three next gen consoles when it comes to processing power, that drawback also means it won't run as hot as its competitors, which is definitely a good thing. It doesn't need any third party cooler as well, but that has not stopped gadget masters Brando from offering the  Wii Crystal Cooler. This unique peripheral does not only act as a stand for your Wii, it also doubles up as a cooler thanks to the integrated high velocity fan. Physics laws dictate that a cooler running device results in a longer life span - definitely something that every Wii owner would want.

The best thing about the Wii Crystal Cooler would be the blue LED light that illuminates whenever the Wii is turned on, complementing the soft, blue glow found on the Wii. Both LED and fan comes with their own ON/OFF switch, letting you keep either one running if you prefer. Hopefully the fan does not make too much of a racket as that would seriously detract from the gaming experience. The Wii Crystal Cooler retails for $19.

Genius does away with scroll wheel in ...