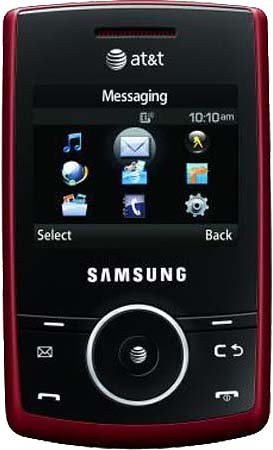 A new phone, the Samsung Propel, set to compete against all the slider phones out there, was released recently.  Samsung even has a video of Ozzy speaking about how easy the phone is to use for texting (entitled:  Sometimes it's easier to text) with a play on how hard it is to understand Ozzy and how it's easier for him to just text people instead of trying to talk.

The A767 Propel has a slider design with a slide out QWERTY keyboard popping from the bottom, not the side.  This Samsung comes in four different colors with Wine Red, Apple Green, Light Blue and Wine Red so that you can match your phone up with your style.

Also featured is the 1.3 MP camera and camcorder will capture your favorite moments in a flash.  A timer, brightness control, and included microSD slot will give you plenty of options when taking videos or pictures.  Includes high-speed wireless abilities so that you can get your emails, browsed videos, and visited sites faster.  GSM enabled and weighs around 3.7oz. so it's light and compact.  Samsung says you'll get around 5 hours of talk time with this phone, too.