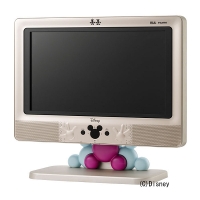 I find it rather strange that the Japanese adopt a mere handful of Americana, with McDonalds, the iPod and Disney products ranking high on their must-have list while other seemingly invincible marketing ploys like the Xbox 360 fail miserably. We'll take a look at a product from one of the former, with this Disney-endorsed 20" LCD HDTV that features a resolution of 1,366 x 768, a brightness level of 500cd/m2, a couple of 3W speakers, TruSurround TX and TruBass support, and a couple of HDMI ports. If you're in Japan, this Disney LCD HDTV will set you back by €540.

Reading on the Run