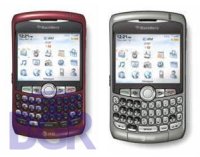 If you have been yearning for a BlackBerry 8310 all this while, but have held out because it did not come in a color you like, perhaps that unfortunate situation will change with the upcoming release of two new colors from AT&T. The BlackBerry Curve will debut in Crimson and Titanium, where the former will feature a reversed keypad with most of the keys being black in color. The Titanium version on the other hand, looks slightly different when placed alongside T-Mobile's Curve 8310, but that conclusion was drawn simply by looking at the photo. Among all the colors available, which are the ones that would make you part with your dough?