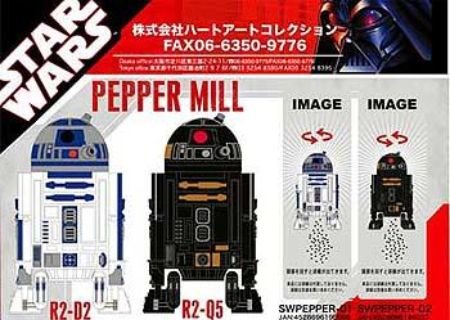 How humiliating for a highly capable astromech droid like R2-D2 to end up performing the most menial of tasks for his human masters - and in this case, grinding out pepper from it's holed bottom. While they definitely add a touch of nerdiness to your dining area, they aren't exactly the most ideal type of tableware to impress your boss with. This looks more suitable for those who are still in college and do nothing but survive on pizza and fizzy drinks for the coming week as they continue to wean off the recently released Halo 3 title for the Xbox 360.

This R2-D2 pepper mill works pretty much the same way like other grinders in its class - just make sure you have enough ungrounded pepper inside before twisting his head all around. You can choose from the white/blue R2-D2 or the black RD-Q5 version. It would have been nice to see both of them come packaged as a set, where the former holds some pepper while the latter dispenses salt. Ah well, there will always be more opportunities to further expand George Lucas' coffers. This unique pepper mills retail for $19 each.