Home›Gizmos›Gaming›Want a Wii? Bake one

Want a Wii? Bake one 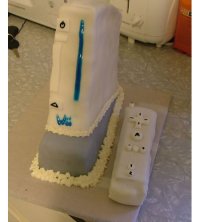 For those of you who can't yet find a Nintendo Wii off the shelf, take heart that there is still a way to snag one. Just head down to the nearest grocery store, pick up all the necessary ingredients, and start baking a Wii Cake. The recipe involves some Betty Crocker yellow cake mix, and you are advised to avoid chocolate at all costs since it doesn't hold together as well for Walak. Other items include French butter cream frosting and some cardboard between each layer, along with grey-colored fondant. Buttons for the Wii and controller are cut out from the fondant, and you gotta eat this as soon as it is baked since refrigerating the Wii cake will cause the fondant to "sweat", hence leaving you with a slimy looking Wii.