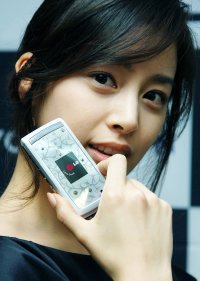 One of the ways you can stand out from the rest of the crowd when it comes to cellphones would be getting it skinned, preferably by a company or person of notable repute. That way, your handset will definitely be different from all the other stock cellphones of the same model. The other way would be to pick up a designer handset, and we have had quite a few in the past including the D&G Gold RAZR V3 that was released a couple of years back. The LG Cyon Crystal Edition is a clamshell handset that comes with crystal and flower patterns, designed by Robert Ryan who is famous for 'Pau Smith'. Features include a 2.2" color display, an external color display, and shortcut keys located at the top flip.

The LG Cyon Crystal Edition comes with a price tag of approximately $425 after conversion which is pretty affordable (relatively) for a designer enhanced cellphone. Unfortunately at that price point, the LG Cyon Crystal Edition will be extremely accessible to many people, so chances are if you own one of these, do expect to see a fair number roaming around the subway stations and streets.