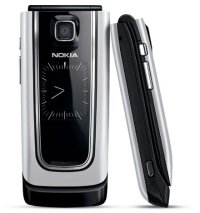 The Nokia 6555 is a 3G clamshell handset that not only oozes with style no matter which angle you are looking at it, it also comes with some pretty useful features. The implementation of an external analog clock on the outer display gives the 6555 a dignity that often accompanies high end luxury devices, and holds the distinction of being the first WCDMA cellphone that come with a smooth back fold design and a recessed hinge.

Features-wise, the 6555 does not come up short as it boasts a 16 million color QVGA internal display - that number is double the number of colors the human eye can see. Which begs the question, why include it anyway? You also get a camera with 6x zoom, 30MB of internal memory, a self-portrait function for those who are in love with themselves, video capture capability, Bluetooth connectivity, and a microSD memory card slot for expansion options. For those who are hankering after a new handset, the Nokia 6555 certainly can be considered when it is released next month for approximately €200 before subsidies and taxes.

Bling up your license plate