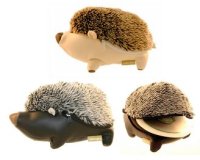 Most of us by now would have had built up a respectable library of audio CDs, software CDs, and DVDs, not to mention currently working on increasing the number of HD DVD and Blu-ray discs in our collection. The issue of storage then comes into play - just exactly how are we going to store all these physical media? While there are some who could not care less, chucking their discs around without a second though, the more organized would prefer to categorize them according to make, followed by an alphabetical order. Disc shelves from Ikea ought to suffice, but what about left overs and loose discs that you get as swag or even samples from magazines?

Enter the Huggable Hedgehog CD case - this case has been dubbed "Sonic Spike" which will surely raise the ire of Sonic fans all over the world, but I must admit they look pretty adorable. The zip opens up the top part of Sonic Spike to reveal sleeves that are used to store your discs. Instead of being hard and tough, the rest of Sonic Spike is soft and plush, letting you use it as an impromptu pillow should the need arise. You can pick one up today for $14.36.

Time sure flies with these clocks