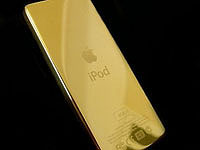 When the iPod was first released, the whole world drooled over its design and form factor that went down exceptionally well with its signature white color. Five generations later (with many other additions on the side), the iPod Video's white color has gotten somewhat bland and all too common. The good folks at Amosu decided to release King Midas if but for a while to touch a fair number of iPod Videos before sending him back to a dark, dank dungeon deep in the abyss. These new iPods now come endowed with 24-carat gold along with a mirror finish. Everything else inside remains the same other than the new opulent coat of paint.

Gold versions of the 30GB and 80GB models are now available for purchase at £299 and £399 respectively. Apparently iPod nano versions are also available, but there is no word on how much each of those cost at the moment.