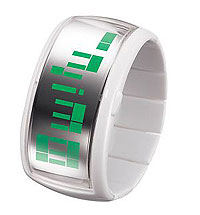 If your sweetheart's anniversary or birthday is just around the corner and you have absolutely no idea on what to get her, perhaps the Pixel Watch from ODM will be able to do the trick. This is one of the coolest watches that has been released in recent memory as it takes a different approach from all those blinged out timepieces, utilizing an electro luminescent band and a translucent casing that ends up looking extremely unusual and contemporary. Wear this out and you will definitely get questions from total strangers on where they can pick one up.

Other than telling the time in a fashionable manner, the Pixel Watch also displays an on screen animation and a scrolling pattern between 9pm and 3am at the turn of each hour. Don't ask me why that particular half dozen hours were chosen, but I suppose they had to throw in a feature of some sort to justify its £80 price tag.

Memory for the Poker Fanatic