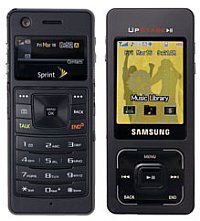 Sprint Nextel has upped the ante in the fast expanding music phone market by bringing you the new Samsung Upstage. If you experience a sense of deja vu after laying eyes on the Upstage, chances are its because you have already seen it back at CES where it went by the moniker Samsung Ultra Music F300. The Upstage is not entirely the same handset since it is no longer a GSM device, although it retains the unique 2-face styling in a shape that is reminiscent of the iPod nano. Sprint executives horsed around, claiming Samsung planned to upstage Apple's iPhone, and hence the name.

A quick glance at the specifications show that that is not the case since the Upstage and iPhone are world's apart. While the Upstage features EV-DO 3G data connectivity that the iPhone sorely lacks, other features are pretty ho-hum, such as Bluetooth 2.0, a 1.3 megapixel camera, 45MB of internal memory, and a microSD memory card slot crammed into a 4.07" × 1.73" × 0.37" body. Sprint will start selling the Upstage from April onwards for $149.99 with a spanking new 2-year contract.

Glowing pillow lights up your life