This weekend, the gals from GadgetSpin (Beth, Eliane, and Ponzi) and myself have been hosting Tech Makeovers at Radio Shack's Netogether. Ponzi and I are hosting the event from  NYC's Times Square, while Beth and Eliane are in hosting the event from San Franciscos' Herman Plaza. If you guys are in a desperate need of a makeover,and are in the area make sure you check  the schedule at http://www.radioshack.com/theshack/ to find out when our Tech Makeovers are. It's all very exciting stuff. We've had New Yorker's dancing, singing, and beat-boxing for technology, and we've given away laptops, Flip cameras, Coolpix digital cameras, iPods, modem and router combinations, and netbooks to people who desperately need a tech makeover. You can watch some of those videos over at www.radioshack.com/theshack.

I'm posting pictures from the event below as well as video and a press release that gives you more details about tomorrow's event. Please check it out, and if you're in the are, come out and say hello! I'd love to see your face!

"THE SHACK is a more contemporary way of communicating with consumers through really smart, interruptive messaging that cuts through the tremendous advertising clutter", said Lee Applbaum, RadioShack's Chief Marketing Officer. "This creative is not about changing our name; it's about encouraging people to take another look at RadioShack, which is one of the key goals of our brand repositioning effort."

To bring the new creative strategy to life, RadioShack is connecting the cities via two, massive, 11x17-foot laptop computers with webcams that allow live video and audio exchanges. Each day's activities are also being streamed live online at www.radioshack.com/theshack.

During the first day, tens of thousands of visitors watched online and in person as the day's events-including live music from the Grammy-award-winning American hip hop artists The Roots, celebrity appearances by Soprano actors Steve Shirripa and Vince Curatola and a cross-country Simon Says game led by Steve Max-unfolded.

Throughout the day, consumer technology bloggers, Beth Blecherman and Eliane Fiolet blogged about the event from San Francisco, and the Techie Diva team of Gina Hughes and Ponzi Pirillo blogged from New York. When they weren't blogging, they hosted periodic tech challenges where audience members were asked to explain why they deserve a tech update. After a vote from the audience, the winners were awarded a variety of tech prizes from RadioShack to help them keep up with the latest mobility and connectivity devices.

Social media consultant Sarah Evans was also on hand to demonstrate to people how to connect through social media.

The event continues Friday and Saturday with a full schedule of entertainment and more opportunities for tech makeovers. Details on each day's activities can be found at www.radioshack.com/theshack where visitors are encouraged to leave comments and make arrangements for bi-coastal reunions with families and friends. Upcoming highlights include:

• The LIVESTRONG Bike-Off pitting ten LIVESTRONG cyclists in New York City against ten in San Francisco in a one-hour bike-off competition. For each mile completed by the cyclists, RadioShack will donate $100 to the Lance Armstrong Foundation.

• Performances from San Francisco by Forest Sun, a singer, songwriter, music producer, poet and painter; Big Light, an indie psychedelic rock band; Minipop, an indie electronic and dream pop band from Oakland; and The Ruse, a Los Angeles-based band whose song "Beautiful is Gone"was recently the iTunes Single of the Week.

• A performance from New York by Melanie Fiona, whose EP, The Bridge, releases on Steve Rifkind's SRC/ Motown Universal Records in fall 2009.

Performers at the Upright Citizen's Brigade Theater will close out the entertainment for the three-day event with a performance Saturday evening at 8 p.m. EDT/5 p.m. PDT.

The schedule for Friday and Saturday can be found at www.radioshack.com/theshack where consumers are invited to watch the live streaming of the event and join in the conversation online. 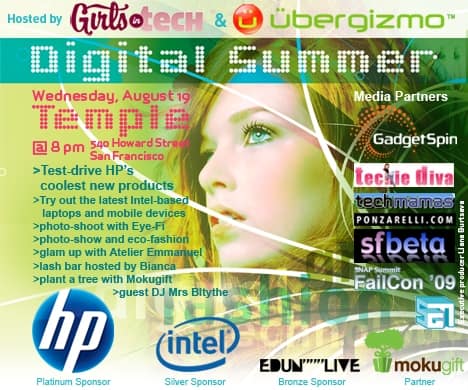 Join us for a Digital Summer Aug. ...