Remember Will Smith's I, Robot which showed up as a summer blockbuster hit a fair number of years ago? Well, I am surprised it took so long for a movie-related toy of this magnitude to be released, and not even by a big time toy manufacturer like Hasbro. Instead, FunShop of Korea has to come up with the NS-5 Sonny model, albeit not in his entirety. You will find its motion sensitive blue LED glow to be the main attraction, featuring the ever piercing blue eyes. There will be a limited run of just 3,000 units, so if you want one for yourself, you had best place a $129 order. Too bad he ain't smart enough to carry out a decent conversation with a human, and it would be nice to have some sort of laser shooting out from his eyes in the future to act as a deterrent. 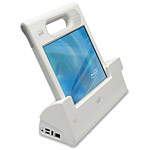