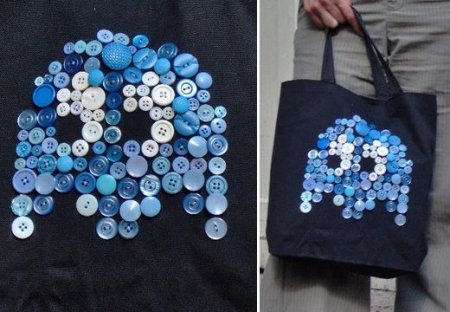 Everyone who grew up during the arcade boom in the 80s will definitely have heard of Pac-Man's exploits as he attempts to gobble down as many pills as possible while snacking on the occasional ghost the moment he gets his tongue on a power pill. Inky is the blue ghost that have irked out yellow hero often, and this time he has been immortalized in the form of an image constructed out of carefully selected buttons on a bag. Apparently the artists had way too much time on hand as well as a sound business mind to stitch together this famous blue ghost in a 13" x 13" square.

Definitely something to get your girlfriend if she hails from the 80s video game culture, but then again if she's clueless about video games it is time you introduced her to some of Nintendo's offerings while breaking her in with this lovely bag. It retails for $20 and is currently a one-of-a-kind creation, as with many other handicraft found on Etsy. You'll need to move extremely fast to pick this up!