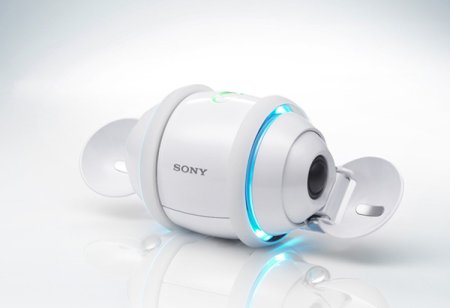 Sony isn't about to just let Apple walk all over its portable audio player legacy, and looks set to fight till the last breath by introducing a new egg-inspired portable music player dubbed "Rolly". It will be released in the Land of the Rising Sun when September 29 rolls around and will feature an active speaker. It looks like a pretty neat player, capable of going back and forth by rotating using its rubber wheel, making it look as though it was grooving to the current tunes being played.

Features include 1GB of integrated memory, support for MP3 and AAC file formats in addition to Sony's very own ATRAC3 and ATRAC3plus formats. The 1,560mAh lithium ion battery is capable of running up to 5 hours of continuous playback before requiring a recharge at a nearby power outlet. As with most other Sony audio products, one can expect clear sound quality and an intuitive user interface. Bluetooth connectivity has even been thrown into the fray, allowing you to enjoy your music privately sans wires. The Sony Rolly is tipped to retail for approximately $344 after conversion.