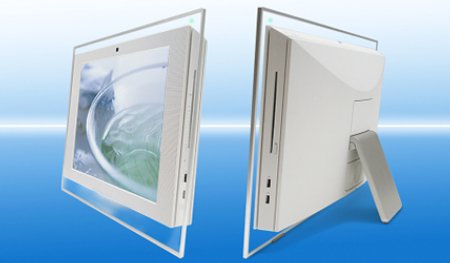 As if Sony wasn't content with dominating the living room during the last generation of video game consoles with the PS2, the Japanese electronics giant attempts to outmuscle the Xbox 360 with their PS3 effort, but so far that attempt is a stuttering one at best despite packing in the most technology when compared to the other two current generation consoles. Sony isn't giving up anytime soon though, with the release of the Vaio LT HD PC/TV that functions as a miniature home theater system thanks to the included Blu-ray drive and a CableCard slot.

It sure looks sweet, packing in a 22" widescreen LCD display (although I don't see it replacing your living room HDTV anytime soon), adequate amounts of RAM and hard drive space, and a video card. An Intel Core 2 Duo processor runs all the proceedings from within, ensuring more than enough processing power to get things going. The standard LT model retails for $1,900 and does not come with Blu-ray capability - you'll have to fork out an additional grand for that.