Poketo, I choose you! 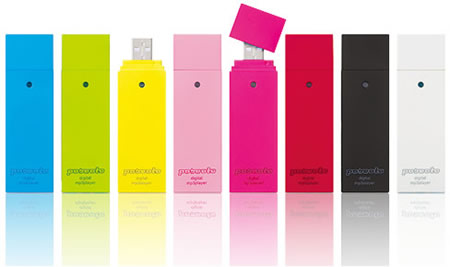 Everyone and their dog knows about the iPod Shuffle by now since its inception a few years ago, bringing an iconic screenless MP3 player to the masses that actually looked good. Just when you thought things could not get any better, Apple released the second generation of the iPod Shuffle that shrank things back even further. Of course, there are still some folks out there who cry foul, claiming that an MP3 player is not complete without a screen to look at. Others don't really mind since they have already stored all their favorite songs on it anyway, so a random playing style really suits such a device.

The Japanese have now received a local, homegrown Shuffle of sorts known as the Poketo. No, you won't get a free Pokemon movie soundtrack with this, but instead a USB stick that reminds one of the 1G iPod Shuffle instead. The compatibility list is as sparse as the storage, featuring a mere 512MB of integrated memory and WMA/MP3 format support, with no room left for a display and a memory card expansion slot. This budget MP3 player comes in a variety of colors (up to 8) and will retail for $33 when released next month in Japan.

Skin your iPhone with DecalGirl