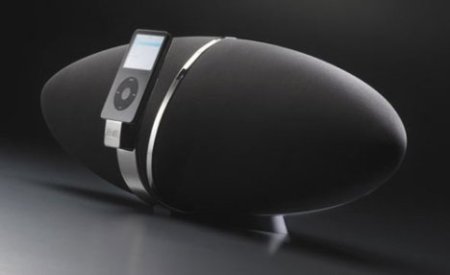 Mention Zeppelin and most people will probably have the image of the classic rock band Led Zeppelin in their minds, followed by the giant airships that ruled the skies fifty years prior to the aforementiond rockers. Bowers & Wilkins has looked into the past to bring us a sound system of the future - the Zeppelin iPod speaker dock system. Since everybody and their dog these days already own an iPod, it makes perfect sense to have an iPod speaker dock system of some kind at home that allows you to enjoy your favorite tunes with your family.

This Zeppelin speaker is shaped after the famed aircraft, and proudly houses up to five drivers within its two foot wide frame. In addition, the five drivers are accompanied by four glass-fiber cones with tapered tubes for the tweeters, and a 5" woofer rounds off the list of specifications. All three channels of amplification will be able to pump out up to 100 watts of power - more than enough to fill up your living room with rich sound. The Bowers & Wilkins will set you back by $599 when it is released sometime down the road.