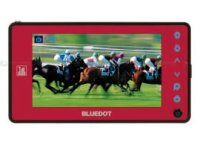 While convergence devices are all the rage these days, the adage "Jack of all trades, master of none" still rings true as you won't be able to pick up the perfect gizmo even with giant leaps made by technology to date. Take the Nokia N95 for example - the GPS functionality clearly isn't up to par with other dedicated personal GPS navigation systems, while the 5 megapixel camera might be impressive in theory, it still can't hold a candle to the real deal. Hence, the miniTV BTV-400 from BlueDot of Japan is a refreshing change from the bunch of multi-functional gadgets these days as it features only one function - to bring you crystal clear reception of your favorite TV show wherever there is a signal.

The miniTV BTV-400 measures less than 5" in length, slimmer than 0.5" thick, and boasts a 4" display. While that isn't small enough to make your eyes squint and water after five minutes of viewing, it certainly isn't large enough to give you jaw dropping visuals on-the-go. The BTV-400 weighs slightly more than 4 ounces and retails for $247. Too bad everything is in Japanese at the moment. Would you get a localized version if you had the dough to spare?

Creative to unleash a tidal Wav