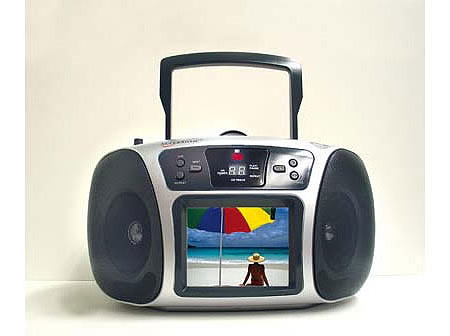 While the Supersonic Boom Box doesn't exactly take you to the skies, it offers a refreshing, modern update to what is considered by many to an icon from a bygone era. The Supersonic Boom Box does not only play music in crisp stereo fidelity, it also does TV and movies as well, thanks to the lovely 5" color display on the front and an integrated DVD player. The DVD player also supports audio CDs and VCDs as well so you get to watch and listen to your favorite movies and soundtracks from a more archaic format. When you're bored of your current entertainment library, just switch over to the AM/FM radio for some random tunes.

It would be nice to see the manufacturer include some kind of USB port or connectivity with modern MP3 players and PMPs since they're already halfway there with the color screen. The design could definitely do with a makeover though. Considering how summer is just around the corner, dropping $180 for the Supersonic Boom Box will definitely spruce up those backyard BBQs and a frolicking time at the beach. Each purchase comes with a headphone and external antenna jacks, a build-in handle, AC and DC car adapters, and an LED display.