Home›Gizmos›Gaming›Zelda rules on the DS Lite

Zelda rules on the DS Lite 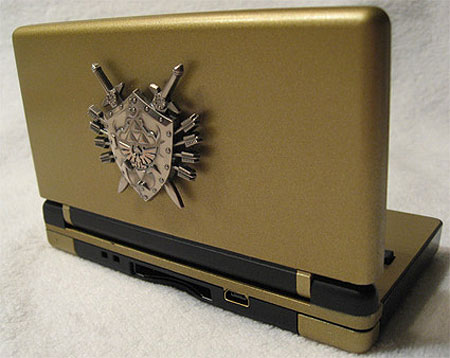 While the Legend of Zelda: Phantom Hourglass has not yet been released on the DS Lite, Nintendo's little handheld console that could already received the golden treatment in the form of a Zelda mod that is good enough to warrant a collective jaw dropping session to any crowd that lays their eyes on it. This Zelda-themed DS Lite is also made by the same person who did the Zelda-themed Wii a while back, and the Onyx DS Lite has been lovingly sprayed in gold paint and affixed with a metal die-cast Master Sword/Shield crest that rotates to match your handheld's orientation.

That alone is a nice touch, but what's better is the ability of the metal die-cast that illuminates whenever the DS Lite is being charged. This unique model is the only one of its kind in the world, and can be yours if you outbid it on eBay. Currently going for $610, the proceeds from this auction will be sent over to Penny Arcade's Child's Play Charity.