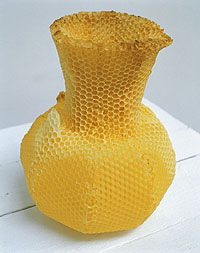 Designer Tomas Gabzdil Libertiny took a look at nature and decided to work on this cool looking vase which was shaped after that of a bee hive, and this vase can be used to coax real bees to colonize it after embossing some wax sheets with a honeycomb pattern. If you're interested in seeing the finished product, you can always head down to Droog's Smart Deco 2 show in Milan later this year - hopefully the bees in Italy won't colonize it by then, giving a stinging reception to those attending the show!

Libertiny has also given some insight on his thought process behind the vase, and I quote, "To give a form to this natural product it has occurred more than logical to choose a form of a vase as a cultural artifact. Beeswax comes from flowers and in the form of a vase ends up serving flowers on their last journey.". It is also interesting to note that the process to create this unique vase took 40,000 bees per week.

Go for gold with Motorola V3i