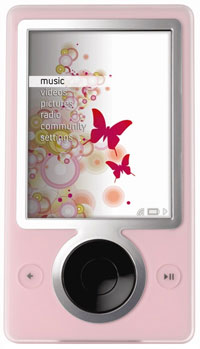 While word about a pink Zune has been circulating around the Internet for quite some time now, most of the pictures that our eyes were treated to were that of a garish pink. Thankfully, there is an official shot of the pink Zune that is much easier on the eyes, featuring a shade of magenta in the mix. To make this newly colored Zune more accessible across the board, Microsoft will release exactly a hundred grand worth of units. Unfortunately, this new color won't do much at all when it comes to making the Zune more appealing to the masses.

In a painful sort of way, I symphatize with Microsoft due to the Zune's "failure" when you compare it side by side with the almighty iPod. It kinda reminds me of how the Sony PSP, while a pretty nifty machine on its own, somehow failed to blow away the Nintendo DS and has been described as a 'failure'.