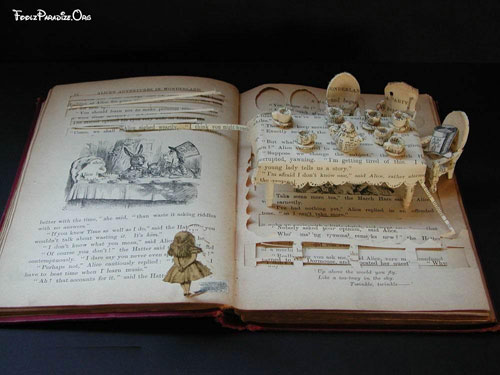 They say that a picture speaks a thousand words, but I think that this picture you see above definitely mouths off much more than that figure. It is not only interesting to see Alice (of the Wonderland fame) standing with her back facing you, contemplating on the many empty chairs in front of her despite hosting a tea party, but what makes the entire artwork even more enticing is the fact that Alice and her surroundings were actually cut out and folded from the pages of the Alice in Wonderland book itself.

I received the image from one of the many random forwards in my e-mail, but you can head on to the FoolzParadize forum and check out where it all began. There are more than just a single variation, and some of them involve a bed of flowers with the background as an index list of all flowers, while the Pied Piper storybook opens up to reveal cut-outs of the man himself holding on to a string of children, leading them out of the ungrateful town. Who says creativity is dead?

Answer & Win: Who's the Sexiest Geek?