The Discovery Store is one that I frequent.  I can admit that I enjoy knowledge and technology pushed together.  I noticed that they have a new Virtual Distance Football available.  The football has a display that monitors how far you have thrown the ball. 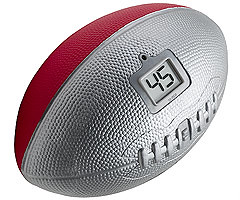 I'm into competition so I can really see this product being used for that.  I can also see it being used to better your own throw.  Apparently it is made of foam and has a nice readout of the yardage you throw the ball.  It measures in yards and looks as if it's only got a two-digit readout (so don't throw more than 99 yards, right?).

The site claims advanced electronics register a distance readout upon impact of the throw.  The readout area looks to be flush to the ball so it won't affect your handling of the ball itself, which is a plus.  The item runs around $19.95 and could be a nice idea for a gift for that person who "has everything".