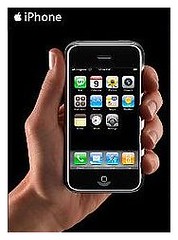 Hailed as the "The Holy Trinity" we welcome thee...iPhone...at least the Apple iPhone for now, since the iPhone trademark is now in dispute. On paper, the trademark belongs to Cisco, who acquired it in 2000 when they bought out a smaller company. When the dust finally settles we'll see how it all works out.

But until then, back to the apple worship...the iPhone...long awaited...much rumoured, and images of said much photoshopped, was officially unveiled on Tuesday January 9, 2007 @ MacWorld, and you should know this unless you've been living under a rock.

The iPhone is essentially three devices in one, the long lusted after widescreen iPod featuring multitouch capability, a cell phone, and an internet communicator, and has been touted as the UMPC (ultra mobile pc see here) done right.

So here's the skinny real quick, internet via Wifi or Edge to facilitate rich html email and browsing via safari, touch screen functionality (nary a button in sight),  access to your music, movies, tv shows, audiobooks, osx embedded, camera, access to google & yahoo and visual voicemail.

The device also smartly senses the orientation of the device and adjusts the screen accordingly and features os x embedded.

The iPhone will hit retail in June at an estimated price of $500-$600 (with a 2 year contract mind you) for the 4Gb and 8Gb versions and will be offered on the Cingular network.

Things to note: no 3G, no 3rd party applications, no user removeable battery, no memory extensibility. But what do we care? Its the iPhone!!!!.

The Pen-It does it for Mac

Will the real iPhone please stand up???