Will the real iPhone please stand up??? 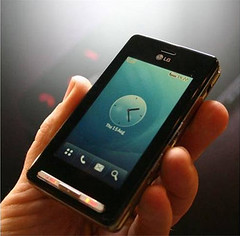 Despite the Apple iPhone being touted as a revolutionary approach to the cell phone, this little gem that won the International Forum Design Product Design Award for 2007, might disprove that theory.

The LG KE850, called by some "the touchable chocolate", sports a 400 x 240 touchscreen, and unfortunately not much specification info is available even though the phone was first featured on Engadget back in December.

Unlike the iPhone, It has two hard buttons, a Send & an End button. The LG KE850 offers much of the same features as apple's iPhone, with animated menu's, video & mp3 playback, touch scrolling, internet via EDGE, a built in 2 megapixel camera and bluetooth connectivity.

In terms of difference the LG KE850 also supports FM Radio, and has some memory extensibility by MicroSD. (They are not exactly competitors however, the LG doesn't have a hard drive).

The LG KE850 is supposed to be available in March or April, and there will also be a version with a simper black & white interface rebranded for Prada, which will be available in Europe. No word on pricing just yet.

You can check out video of LG's Touchscreen phone here
Be advised that the video is in French.