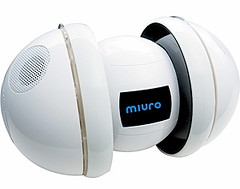 Introducing, Muiro (which stands for music innovation based on utility robot technology...just rolls off the the tongue, doesn't it?), the newest offering from ZMP, Inc. Muiro is basically a 14 inch long egg-shaped robot developed with Kenwood that rolls and twists around on your floor playing music wirelessly wherever you happend to be.

Launched in Japan this summer and due for general release later next year, Muiro the musical robot comes equipped with a camera and sensor that the robot uses to receive and respond to the owner's wireless remote and to avoid bumping into furniture and the like. Apparently, this little super-robo-music-rolly thing also positions itself at the perfect distance for your listening pleasure.

Muiro will retail for around £500, is available in white, black, yellow and red (sorry, no pink), and allows you to attach your iPod or stream music wirelessy from you PC. Obviously, this sleek little gizmo is designed for those with some extra cash and without other organisms competing for floorspace (like small children or playful animals), but it's still a very cool, if pricey, gadget.

Mac Addicts Shows Us Their Tats