Home›Gizmos›Computers›The Year of the Tablet PC

The Year of the Tablet PC 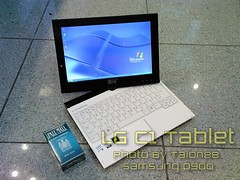 Expect 2007 to be the year of the Tablet PC, with Microsoft Windows Vista on the horizon, and the fact that Tablet PC Functionality is built into the Operating system (Home Premium versions and above) expect to see a proliferation of Tablet PC's gracing the consumer market.

Industry leader DELL, has already been talking about entertaining the idea of coming to market with their own Tablet PC, and today LG has released a new model, the LG C1.

Specs are unconfirmed but the Tablet is to feature an Intel Core Duo Processor, and Nvidia graphics. The notebook also allows GSM users to use their SIM cards, for wireless connectivity and off course features 802.11 wireless and Bluetooth.

Your All in One Phone

Order Drinks Fast at the TechBar