Home›Gizmos›Computers›All the things you'd want in a Laptop

All the things you'd want in a Laptop 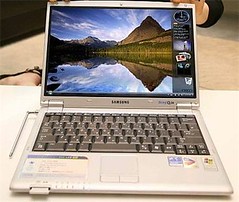 Well most of its features cover all the yummy goodies you want in a laptop.  Samsung is set to release the first flash based laptop in June. The Q30-SSD features a 32GB flash drive, which basically translates into faster boot times (20-50%) and faster resuming from sleep or hibernation, faster read times (300 timesfaster @ 53MB/s, write times (150 times faster @ 28MB/s).

The price for all this goodness is a bit much though starting @ US$3700, the machines are to debut in Korea.

The only compromise here is the small HD capacity (but that is something to be remedied in the near future.), and unseemly mix of old & new technology as the machine features a 1.2 Celeron M processor.

I figure however the processor choice was made as a concession to avoid heat issues.

Is That a Phone in Your Pocket ...