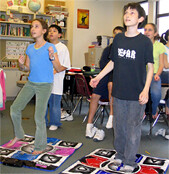 CBS recently announced plans for "Dance Revolution", a live-action show based on Konami's popular dancing game. Aimed at teens and tweens, the show will air alongside "CAKE", "Horseland", "Kooky Kitchen", "Sabrina: The Animated Series", "Trollz" and "Madeline" on Saturday mornings. The premise of the show is for teams of dancers to compete for the best routine, with certain steps presented in DDR's classic flying magic arrow style to encourage viewer participation. Music will be provided by a live house band, who will also serve as the hosts. Being a big fan of DDR myself, it's exciting to watch the franchise cross over to an even broader medium (even though I'll likely never get up to watch it). Even better is CBS's commitment to encouraging young people to become more active and lead a healthy lifestyle. Watch for this to air mid-September. [Link]