Home›Gizmos›Misc›ValleySchwag: Bringing the Trade Show to You

ValleySchwag: Bringing the Trade Show to You

I recently attended my first industry trade show, and lemme tell ya…the amount of free crap given away at these things is staggering. It was fun and all that, but I wouldn’t want to have to go more than once a year. Fortunately, ValleySchwag now brings the trade show to you by going out and finding the best Silicon Valley giveaways and shipping it to your door.  Now entering its second month, ValleySchwag has already reached 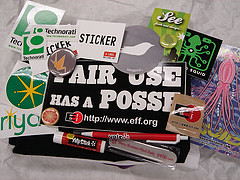 over 600 subscriptions. The page states that they will send a different selection of “t-shirts, ballcaps, notepads, stickers, keychains, and other booty” from the hottest Web 2.0 companies once a month. Notable spottings from the flickr pool include Technorati, Laughing Squid, Facebook, and a recent Women 2.0 conference I wish I had known about. The site’s operators encourage feedback and love to accommodate special requests, which I was quickly able to prove since a request to have some of those elusive EFF stickers (as pictured from last month’s package) included with my first order was easily granted. They’ve also made it a priority to make sure the ladies are represented by searching for girl-sized clothing whenever possible. I do have to admit that $15 a month does seem a little high, but every delivery is promised to contain at least one t-shirt that would cost at least that much or more if purchased separately.  Besides, I’m enough of a schwag whore that I’m guaranteed to get a kick out of it at least once. Expect another post reviewing my loot after it arrives sometime mid-month. [ValleySchwag]

Tell Me the Time Shirt