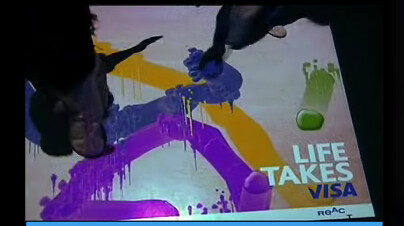 A company called Reactrix has taken mall floors to a new level.  I noticed a neat setup at our mall while holiday shopping.  On the floor was a mat or pad with a projected video game on it.

If you placed your foot near an asteroid on the mat, it would explode.  Then after playing the game a bit it showed a few commercial ads but they were interactive, too.

Coca-Cola, Visa and Sprint have already grabbed this idea up and are utilizing it in their marketing plans.  This interactive advertising is a great idea and I can see it in more widespread use in the future.  Reactrix claims measured recall is very high with an average of 55% and a high of 72%.  Aided recall was averaged at 86% with a high of 99%.  Nice job, Reactrix!

You can see video demos on the site of what I experienced.