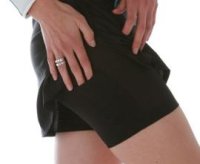 iPod apparel are getting more and more common these days, but they aren't exactly the norm just yet. We have seen all sorts of clothing, ranging from shirts, jackets, and even suits that conceal your iPod somewhere while offering controls on the sleeve, but most of these are worn by men since the apparel manufacturers seemed to have forgotten about the iPod toting female population. That day is over, as I am pleased to announce this new range of mini-skirts, capris, and bootleg pants that are more than capable of holding your iPod.

Prices for this range of musically inclined apparel aren't exactly sky high, but they are a tad expensive compared to regular clothing - ranging from $55 to $96. Still, it is nice to carry your iPod around without hooking up a case to the side of your waist all the time. Thankfully, the range doesn't include a single one of those ridiculous headwear that carry the iPod.