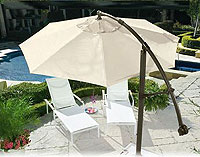 With summer just around the corner, it is time to bust out the suntan and have some fun frolicking under the sun (sorry to you folks living at the southern tip of the earth though). The heat could get unbearable at times though, sending you scrambling under a garden umbrella in order to avoid getting roasted despite slapping a health amount of suntan lotion all over already. Often times, you find that you have to reposition yourself as the sun moves, but the Cantilever Umbrella does away with that annoyance as it comes with the ability to follow the sun wherever it goes.

Measuring a whopping 11 feet in diameter, the Cantilever Umbrella is more than capable of providing a whole bunch of coverage for your family and friends. A foot pedal located at the base enables you to move it up to 360°, keeping you and your bunch of merry friends under the shade at all times. Heck, it even comes with built-in LED lights that give off ambient lighting in the area long after the sun has set. Brookstone is offering the Cantilever Umbrella for $900 a pop.