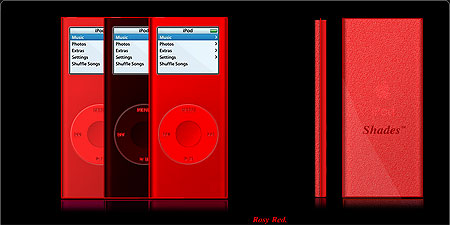 If you've just bought yourself or were given the iPod as a gift recently, hurry up and pick up an iPod case already if you haven't yet done so. Apple's media players are things of beauty, but they're also pretty fragile and pick up nicks and scratches faster than a scratching post dipped in catnip. Shades has recently announced its new line of Shades iPod Cases, measuring a mere 0.4mm in thickness and yet protects your screen and Click Wheel. Made from polyurethane, the Shades iPod Cases come in a choice of nine different colors, including Cool Blue, Aqua, Rosy Red, Sunrise Orange, Violet, Serene Green, Hot Pink, Clear, and Midnight Black.

The iPod nano 2G range has two colors less to choose from though. Owners of 4G and 5G iPods as well as 1G and 2G iPod nanos will be able to pick up these beautifully colored cases for $16 and $13 respectively.