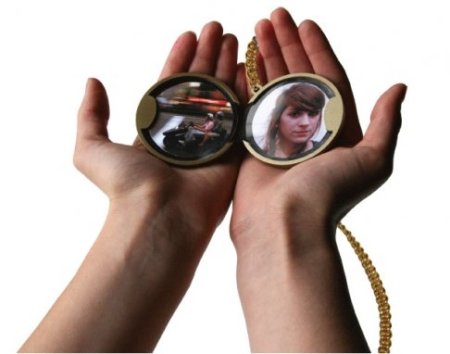 I must say that pocket lockets are pretty adorable fashion items, but more often than not they remain in the domain of the old, white-haired, and geriatric who can't be bothered just how many megapixels your camera has, as long as their most precious memory remains safely tucked inside one of those lockets. From the exterior, the 1881 Pocket Locket from Kodak looks just like any antiquated locket, but designer Lindsey Picket has used her imagination to throw in an integrated camera lens on the locket's exterior along with twin LCD displays that appear when you open the locket up.

These twin LCDs will display your favorite memories in a digital format whenever the locket is opened, thanks to its integrated memory. The entire 1881 concept was designed to pay homage to the heritage and value of family heirlooms while introducing a little bit of modern technology. Unfortunately, it currently remains a concept at the moment so you'll have to cobble one together or beg a hardware manufacturer to mass produce these if you want one so badly. Still, it looks set to be a solid idea for a fashionable gadget.