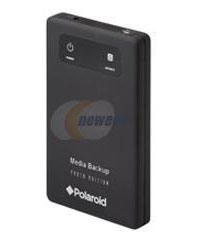 So you've built yourself a handsome collection of photos on your computer, but have absolutely no time to organize them. Over time, you realize that the collection of photos have grown into an unmanageable mountain. The Polaroid ClickFree can help you sort out this mess as it is capable of copying virtually every single picture from your computer to its 2.5" hard drive. Unfortunately in the same process, the ClickFree will also grab all the redundant images from places like your Windows system directory, leaving you the task of removing icons, temporary Internet graphic files, and even shortcuts later on. The Polaroid ClickFree can hold up to 40,000 images on average and retails for approximately $140.

A silver lining in what is arguably a dark cloud with the Polaroid ClickFree would be its ability to dig out photos from directories that you never even knew existed. This feature is definitely a double edged sword as you will be able to find long lost pictures, while those who have a naughty streak will be aghast should their tech savvy girlfriend/wife find questionable pictures of women in rather compromising situations. All in all, the firmware should be updated to prevent the Polaroid ClickFree from poking its nose where it is not wanted, focusing solely on retrieving pictures from relevant places within a hard drive.