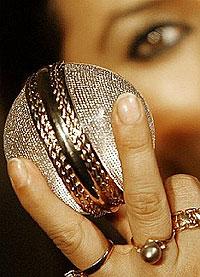 So you've recently struck the national lottery and have absolutely no idea on how to spend all that newfound wealth. I could give you my number and beg you to be my best friend, but even after you've given me more than I ever wanted to, you would still be left with a considerable amount of dough. Here's a pretty mindless way of helping you spend all that easy earned cash - by dropping a cool $68,500 for a diamond studded cricket ball.

While Americans aren't exactly thrilled by this sport, we definitely have an eye for bling. This unique cricket ball will carry exactly 5,728 pieces of diamonds, which is more than enough to propose to your girlfriend 5,727 times over until she says yes. Strangely enough, this blinged-out cricket ball does not hold the distinction of being the first diamond cricket ball as that honor goes to one created three years ago. That came with much less bling, carrying a mere 2,704 diamonds.

OCZ Trifecta connects in many ways