A watch Einstein would love 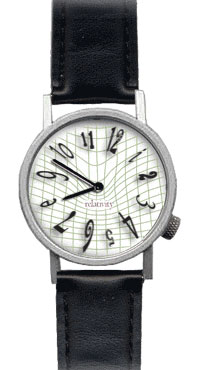 The theory of relativity from Albert Einstein was one of the most memorable ones left behind by this great scientist and mathematician, and in honor of his theory, the Relativity Watch was invented. No, it won't be able to send you back in time to right those wrongs you have accumulated over the years, but what it does is tell the time in a very different manner. Instead of having the hour and hand needles move, the Relativity Watch does the opposite and moves the numbers to match the hands instead.

Each $29.99 purchase comes in an attractive gift box and features a genuine leather band in addition to accurate Japanese quartz movement. I must admit while this is a cute idea, there really isn't any point reinventing the wheel as you can't tell the time any better than how we do it now - regardless of whether it is digital or analog. Just don't mess with the way the hands move or throw us those weird binary watches and we'll be fine.

Spy on your home aurally