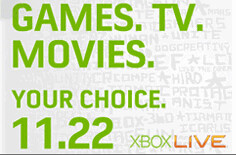 Xbox live is going to be featuring new features to their gaming consoles. Xbox has developed a relationship with Turner Broadcasting, Viacom, Paramount Studios, CBS, Warner Brothers, Ultimate Fighting Championship (UFC) & more. So I guess this is the Microsoft's way to compete against the iTV from Apple that is rumored to be launched in January. Plus the Xbox has a HD dvd player and the ability to watch HD, you will probably be able to download and watch HD TV shows and movies too. So look out for this new feature in xbox live November 22, 2006.