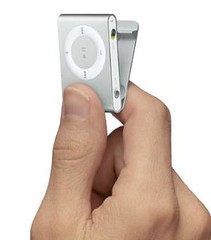 Undergoing the most drastic change is the new Apple lineup is the iPod Shuffle, which has been halved in size, comes in a metal case, and now sports a metal clip, which you can use to attach the diminutive shuffle to your clothing or accessories.

The new Shuffle also sports a new headphone from Apple, and longer battery life of 12 hours of continuous play weighing about 1/2 of an ounce and capable of storing about 240 songs.

The players capacity has been capped at 1GB of flash memory and pricing starts @ $79. The players should start appearing in October of this year.

More Apple's from the Tree

How Apple Does Movies