Not only is this laptop themed after Coca-Cola but it's also marketed toward the 2008 Olympics which will be held in China.  It carries the Coca-Cola logo along with China's 2008 Olympics rings on the top, just under the Lenovo logo.  If you're a crazed enthusiast of the Olympics, this is definitely a laptop you'll want to budget for.

It will sell for around 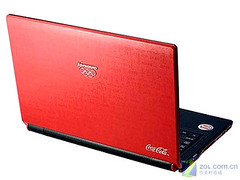 I have to agree with others when it's said that the laptop itself is not that powerful and for the amount of cash they are asking, it is more of a 'collectible' type purchase for an enthusiast.