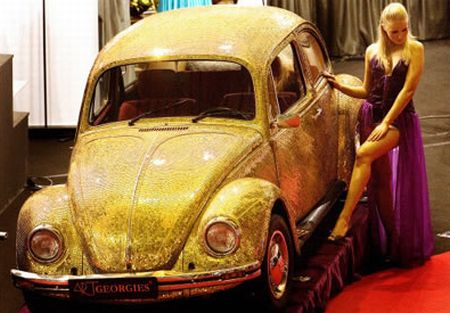 Everyone knows what the Volkswagen looks like, thanks to Hitler's effort to make a people's car way back in the last century. While the new Beetle has already made waves since it was launched, the old one still holds sway over the hearts of many an auto enthusiast. This 1968 Volkswagen Beetle ups the bling factor as it comes encrusted with tiles made of a blend of 18-karat gold and glass - talk about one dazzling combination! Of course, you'll need to fork out around $88,000 for it. Better not park this just about anywhere or people would plunder and scrape off the gold just like how the ancient pyramids of Egypt were looted.