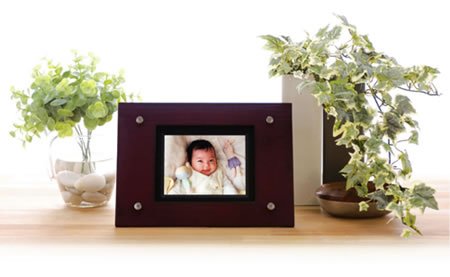 Digital photo frames are definitely making their mark in the living room of homes across the world as more and more people jump onto the digital camera bandwagon. After all, having your favorite holiday moments stuck in an external hard drive or tons of flash memory isn't going to make an impact compared to a physical photo album as well as memories shown in photo frames. iRiver has taken a break from developing portable media players to bring us the Siren DF150 digital photo frame.

The Siren DF150 looks like a classic photo frame at first glance, thanks to the mahogany frame. A closer peek reveals a 5.6" QVGA LCD display set within a metal sub frame along with memory card slots that read SD, MMC, CF, and Memory Stick formats. Just in case you have extra photos on a USB flash drive, the USB 2.0 port comes in handy. Unlike other digital photo frames, the Siren DF150 features 512MB of integrated flash memory, letting you use it straight from the box without purchasing additional memory. Features include a clock and calendar function, slide shows, image trimming, enlargement, and brightness adjustment among others. It will be released in Japan on August 3rd for roughly $125.

Award winning smile in an instant