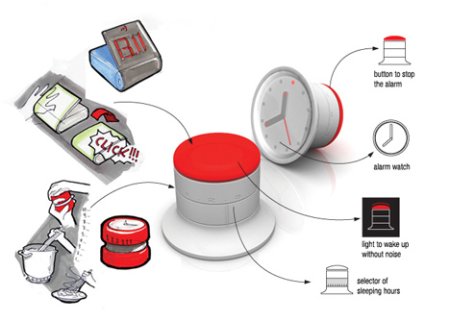 Designer Francesco Costacurta has proposed the idea of the Hybrid Alarm Clock, featuring an amalgamation between a minute counter which is used as a guide in the kitchen and a normal alarm. Since the Hybrid Alarm Clock comes from two different 'parents', it naturally features the characteristics of both. You can use it like a normal alarm by simply selecting the hour that you want to arouse yourself from a peaceful slumber or selecting a pre-determined number of sleeping hours which consist of three, five, and eight hours. Stopping the alarm is a no-brainer - all you need to do is give the large red button on top a hit and you will be able to resume your slumber undisturbed, er, I mean wake up and get going.

A pulsing light can also be used to substitute the alarm sound in order not to disturb the rest of your roommates. I don't know about you, but you'd better have a backup plan if you insist on using just a flashing light to get you out of bed since you might actually sleep through the entire 'alarm' in reality.