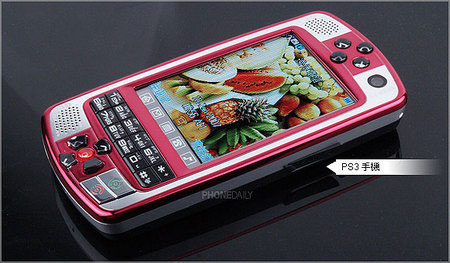 Copyright and intellectual property laws in China could not get any looser, with rampant piracy of electronic goods being one of the results. Their latest effort is one that is stupendously horrifying, taking popular electronic items and integrating many functions onto a single device. The Amycoll PS3 is a cellphone that takes after the Sony PSP portable handheld in terms of design, while marrying the name of Samsung's Anycall and Sony's PS3 brand names. Features include a 2 megapixel camera behind and 1.3 megapixel in front (which also doubles up as a webcam, although 3G connectivity is highly doubtful), a microSD memory card slot for expansion options, audio and video playback (supported formats include MP3 and MPEG 4), a USB port, and a QVGA display.

The Amycoll PS3 might have a next gen console name attached to it, but it comes with pre-loaded emulators that do just Game Boy Color and SNES games. I guess plenty of people in China will be introduced to the wonders of Mario and his cohort should they plan to take up the Amycoll PS3 in huge numbers. Pricing details are unknown, but it shouldn't cost more than a PSP.