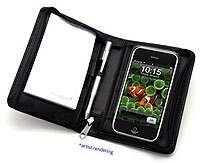 While the iPhone might be confirmed, it definitely is far from being released at the moment as Apple has to deal with the problem of an extremely poor battery life. This has not stopped Incipio from believing the iPhone will take off in a spectacular manner when released, that they have already started releasing a line of iPhone cases a full TWO months before the actual iPhone launch. The first of three iPhone-centric products comes in a typical notebook format, complete with pen for you to use before the iPhone is event out. One gripe about this design (as seen on the left) is the vulnerability of the iPhone's screen to get damaged.

The second design consists of a velcro attachment with a magnetic flip case that comes complete with slots to carry all your credit cards along with a secondary pocket to store loose change and some notes. Last but not least, we have the horizontal pouch that comes in several colors such as red, brown, black, and even a pink and white combination which needless to say, targets the fairer sex. Any one of the three will retail for $15, while a leather version of the horizontal pouch comes with a $3 premium.