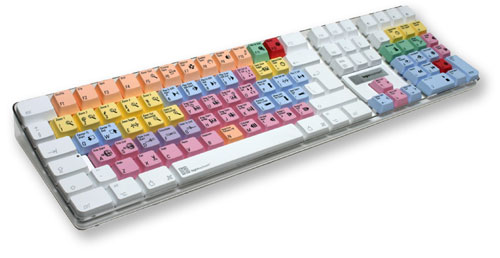 With the Optimus Maximum keyboard from Art.Lebedev losing a feature despite the step up in price with each announcement, it is a wonder if people would still line up and be willing to part with $1,500 for it when they have a much cheaper alternative in the form of the Logickeyboard, albeit with less technology packed inside. Instead of having monochrome interactive LED lit keys, the Logickeyboard contains keys with shortcuts printed on them.

Users who want to master a program of their choice will be able to order a custom-made keyboard with all the necessary shortcuts pre-printed at a relatively affordable price. For example, an Adobe Photoshop Apple Pro G5 White key set costs 59 Euros while a keyboard with Apple's Aperture as the default key setting retails for 119 Euros. All keyboards will ship in U.S. and U.K. variations, so it doesn't matter which side of the pond you are at. In fact, the company is willing to even let customers build their own keyboards according to their needs.

Carry your photos in your mouse